The journal publishes original, unpublished works in philosophy and science as well as reviews of recent books in these fields, reissues of old seminal works, and translations of major texts related to the philosophy in science.

The journal is peer-reviewed and uses double-blind evaluation process with at least two referees for an article. The aim of the review process is the expert evaluation of submitted manuscripts for their relevance, correctness of language, and technical soundness. Reviews are an essential tool for ensuring the excellence of the journal.

Editorial staff of ZFN carries out a preliminary assessment of the text and qualify it for further review. The editor reserves the right to reject:

If the editorial staff recognizes that the topic of the text corresponds to the magazine profile and satisfies other specified criteria, it is then submitted for review.

The review process evaluates the text for its academic merits and formal and linguistic correctness. (The review form, which clearly outlines conditions for the acceptance for publication, can be obtained from the journal’s website.)

If the reviewers recommend the text for publications without any changes, the editorial staff will immediately inform the author via email. At that point, the author cannot withdraw the submitted work or decline its publication.

If at least one of the reviewers recommends the text for publication under the condition of introducing specific changes, the editorial staff informs the author about the decision and sets a deadline for submission of the corrected work. If the corrected work is not submitted within the specified timeframe, the text is rejected, unless the author can justify a request for a new, extended deadline.

After the text has been accepted for publication, it is sent for proofreading.

The Editorial Board as well as the publisher  of ZFN are committed to meeting and upholding expected ethical standards and take all possible measures against publication malpractices. Moreover, they take their duties of guardianship over all stages of the publication process extremely seriously and undertake to deal with any form of publishing ethics abuse.

The full statement can be found here.

Philosophical Problems in Science journal do not charge Article Processing Charges (neither submission charges, page charges nor any publication fees) to its Authors.

See Journal Sponsorship for the information about funding.

Copyright in Materials Submitted to ZFN

By submitting a manuscript and/or supplementary files the Authors are granting to the publisher of ZFN a non-exclusive, charge-free, worldwide licence, for the duration of the applicable jurisdiction’s copyright protection, to reproduce submitted materials in any medium (including electronic and printed format of the journal) for all purposes relating to the journal activities, or to those related activities of which ZFN approves. Such licence shall become effective from the date of submission to ZFN.

The non-exclusive license allows the Authors to hold their respective copyrights and to retain publishing rights without restrictions.

Editors and the publisher of this journal provide open access to its content on the principle that making research freely available to the public supports a greater global exchange of ideas and knowledge as well as verifiability of results.

The content of this journal is made available in accordance with the principles of BOAI Budapest Declaration.

All articles published in Philosophical Problems in Science are made freely and permanently accessible online upon publication without access or subscription charges, embargo periods, or user registration.

The articles published within the journal are licensed under a Creative Commons Attribution-NonCommercial-NoDerivatives 4.0 International License.

The texts are published in a following issue (according to the decision of the editorial staff). If the work is accepted for publication, the author can request the certificate of intended publication by contacting the editor by email.

This journal utilizes the PKP PN LOCKSS system to create a distributed archiving system among participating libraries and permits those libraries to create permanent archives of the journal for purposes of preservation and restoration. The journal is also archived by the Polish History Museum, Central and Eastern European Online Library, The Central European Journal Of Social Sciences And Humanities and Biblioteka Nauki.

In addition, authors are encouraged to archive pre-print, post-print as well as publisher's version of their papers in their institution's repositories and, if they wish, on their personal websites.

The Reference Version of the Journal

The reference (basic) version of the magazine is a printed format. The electronic format corresponds fully to the basic format.

Philosophical Problems in Science (Polish: Zagadnienia Filozoficzne w Nauce, abbrev. ZFN) are published by the Copernicus Center Press in association with Faculty of Philosophy, Pontifical University of John Paul II in Krakow. Copernicus Center for Interdisciplinary Studies is a cooperation platform for both institutions.

The journal’s Internet site history page details the publishing history of the magazine. 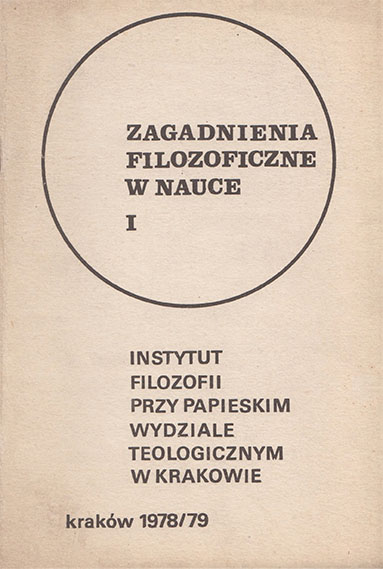 The magazine was founded in 1978 by Michael Heller and Joseph Życiński.

Initially, the magazine was published as a newsletter from interdisciplinary seminars organized monthly by the Institute of Philosophy of the Pontifical Faculty of Theology in Krakow (Franciszkanska 3 str., later at the Augustinian Monastery on Augustinska str., in Krakow).

Seminars originated from meetings dedicated to the study of the relationship between science and faith, and they originally took place in the Palace of the Archbishops of Krakow on the initiative of Cardinal Karol Wojtyla. The meetings continued a long tradition of Krakow's philosophy of nature, with roots going back to the second half of the nineteenth century

In 1978, after the election of Wojtyla as Pope John Paul II, the seminars fundamentally changed, becoming seminars with the published proceedings “Philosophical Problems in Science.”

Due to the political situation in Poland, the first editions of the magazine were published unofficially. The annotations “for internal use” found in the early editions - included to deceive official censorship - are testimony to this early history of the journal.

After the founding of the Pontifical Academy of Theology (PAT) in 1981, the magazine was published by the PAT Faculty of Philosophy.

In 2008, the Copernicus Center for Interdisciplinary Studies was founded. It was created based on the foundations of OBI as a joint initiative between the Pontifical University of John Paul II in Krakow (successor of PAT) and the Jagiellonian University. The new organization continues to publish the magazine.

On February 10th, 2011, Archbishop Jozef Życiński, co-founder of OBI and Philosophical Problems in Science, died suddenly during his stay in Rome. His contribution to the development of the journal and the philosophy of science was commemorated by a special edition of ZFN.

Since 2013, the journal has been published in cooperation with the scientific publishing house Copernicus Center Press, working under the aegis of the Copernicus Center for Interdisciplinary Studies. The year 2015 has seen significant changes in the organization of the editorial board of the journal: Michael Heller became an honorary chief editor, and Pawel Polak took over as a chief editor. In addition, the scientific advisory committee and the reviewer team have been revamped, and the organization of the editorial offices has been rearranged.

The journal has begun to be published in an Open Access mode (Diamond Open Access), available on the Open Journal System platform.

Currently, the magazine is published semiannually (two issues per year).

More about the history of the magazine and its philosophy can be found in: